Eboni K. Williams on RHONY, pulling a ‘Naomi Osaka’ and protecting her peace

by Preston
in Entertainment
0

Eboni K. Williams is all about protecting her peace. In an exclusive sit-down with theGrio, the newest housewife of New York opened up about her first season on the hit franchise, her thoughts on that intense Hamptons dinner, and why she’s taking a break from social media.

While New York City is known for being one of the most diverse cities in the world, it took Bravo‘s hit series “The Real Housewives of New York” about 13 years before casting a Black woman as one of those coveted “apple-holders.”

Joining as the first Black cast member, Eboni K. Williams has been bringing it, to say the least. From fabulous fashions, nuanced insights with the audience, and immediate chemistry, it’s clear the accomplished lawyer and television personality fully understands the assignment.

In the middle of her announced “social media break,” Williams caught up with theGrio last week to break down some of the triggering moments in RHONY (including a scene in which she is referred to as an “angry Black woman”), what she specifically brings to the table on the series and how Naomi Osaka inspired her decision to get “off the ‘gram.” 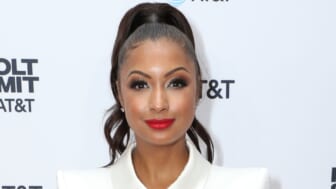 While only a few episodes in, Williams has already gotten a taste of multiple facets of the Real Housewives franchise, experiencing her fair share of lavish parties, group trips, and, yes, some intense drama.

Two weeks ago, RHONY aired its fifth episode of the season in which Williams, while trying to effectively communicate her feelings to her co-stars Luann de Lesseps, Ramona Singer and “friend of” Heather Thompson, is referred to as “an angry woman.”

The triggering nature of the conversation and the fallout have taken over the fandom in social media, with conversations on Twitter, Clubhouse, and Instagram breaking down the implications and intensity of the scene.

Speaking to theGrio, Williams opened up about how the viewers often see a shortened version of what actually happens in person.

“It’s just deeper, more complicated and more textured in the real thing versus just watching a 44 minute, edited episode,” she shared. “It’s really like 20 minutes of interaction that we’re witnessing…meanwhile we were in the Hamptons, it seemed like 25 years!”

Still, the conversations that the intense scene sparked, Williams believes, are essential, and the reliving of the scenes makes it all the more emotionally taxing.

She explained, “A lot of people have been asking me recently, is this better or worse than my experience in hard news…and you would think that perhaps my experience in cable news, especially my Fox News days would have kind of maximumly prepared me for this!

“The difference here…is the reliving of it. These things happened in real-time back in September of last year, and I had to go through it at that point and so did they!” Now, months later, Williams has to relive it as it airs on television, which she describes as, “a cycle of exposure to things that can be traumatic.”

On June 1st, ahead of the pivotal fifth episode of the season, Williams took to Instagram live to announce a social media break amid conversations surrounding the Hamptons dinner scene. In it, she described the scene as “the beginning of the foundation of the relationships” she will have with the women in her cast.

Shedding light on her comments, she told theGrio that her main priority was living her authentic self, and that includes genuine relationships with the women on the series.

She shared, “My intention was to just really commit to whatever forming or not forming of connection and relationship that I ended up having with these women, would be truthful and authentic and really organic.”

One relationship forged out of the season is her friendship with Sonja Morgan, which she describes as “infectiously wonderful.” She explained that after the tough Hamptons trip, “I see Sonja, Sonja sees me, and now we can go on this incredible ride together as women.”

The Instagram Live video recorded on June 1st gained a lot of support, with the post earning over 200,000 views on the app and a slew of comments of love towards the reality star. As of June 15th, Williams has officially returned to social media and is ready to continue the critical conversations with the fans.

Speaking to theGrio, she shared that Naomi Osaka inspired her to take the break in the first place.

She shared with us, “Let me speak to this queen for a minute…she is an extremely young, talented athlete of epic proportions. Her stakes are way higher than mine in this moment.” She continued, “This young lady is having the courage to pick herself, and if she can do that at her young age, my old a– better get it together!”

You can watch Williams entire interview with theGrio above.

Big Sean says he grew 2 inches after going to chiropractor

Big Sean says he grew 2 inches after going to chiropractor

Big Sean claims routine visits to the chiropractor helped him get taller.Instagram Big Sean just got a little bigger. The...

Credit: DFree/Shutterstock Garcelle Beauvais enjoys a lot about The Real Housewives of Beverly Hills. But there are also plenty of...

Simone Biles was privately mourning the loss of a loved one amid her time at the 2020 Tokyo Olympics. The...