by Preston
in Entertainment
0


Barack and Michelle Obama shared endearing messages of adoration and excitement for the future of daughter Sasha Obama, who turns 20 on Thursday. Both the forever first lady and the former president tweeted throwback photos of Sasha as a child.

“Happy birthday to my darling Sasha! I am so grateful for every laugh we’ve shared — and everything you’ve taught me over the years. You’ll always be my little girl, but I couldn’t be prouder of the woman you are becoming. Love you so much!” wrote Michelle.

Former POTUS posted similar sentiments writing, “Happy birthday, Sasha! You’ve grown so much, and it’s been a joy to watch you become the person we always hoped you’d be. Your mom and I can’t wait to see where life takes you next.”

Sasha and her older sister, Malia Obama who turns 23 in July, currently attend the University of Michigan and Harvard University, respectively. The girls spent the better part of 2020 doing online courses and gaining quality time with their parents in Washington D.C. and Martha’s Vineyard as the COVID-19 pandemic played out, PEOPLE reports.

With the Obama girls now turning into young Obama women, time is moving so fast that the former first lady said last month that she “almost forgot” her daughters are turning 20 and 23 this year. “I mean, I’m just like ‘Stop there.’ I don’t even have teenagers anymore.”

“This time has allowed us to get some stolen moments back with our girls. Those recaptured moments have meant the world to us and I think they’ve made our relationships with our children even stronger,” Obama added. 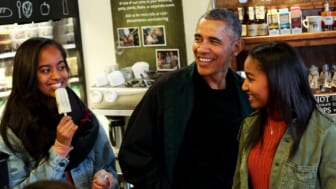 “What I find interesting is they’re also starting to be very strategic about how to engage the system and change it. They’re not just interested in making noise, they’re interested in what works,” Obama told CNN on Monday.

In the same CNN interview, Obama also described what he believed to be a balanced response to ‘cancel culture’ from his daughters.

“They’ll acknowledge that sometimes among their peer group or in college campuses, you’ll see folks going overboard (on cancel culture). But they have a pretty good sense of ‘Look, we don’t expect everybody to be perfect,” said Obama. “We don’t expect everybody to be politically correct all the time, but we are going to call out institutions or individuals if they are being cruel.’ “

Is Madison LeCroy the one behind Bennifer 2.0? The “Southern Charm” star jokingly took credit for getting Jennifer Lopez and...

Did Elon Musk just blow Miley Cyrus' cover?! Oh wait, that was sarcasm. Still, the singer amusingly played along after the...

Eboni K. Williams on RHONY, pulling a ‘Naomi Osaka’ and protecting her peace

Eboni K. Williams is all about protecting her peace. In an exclusive sit-down with theGrio, the newest housewife of New...

More than a year after filing for divorce from former NFL player Jay Cutler, Kristin Cavallari has a clear focus…...

Apple iPad Air (2020) review: The tablet for everyone